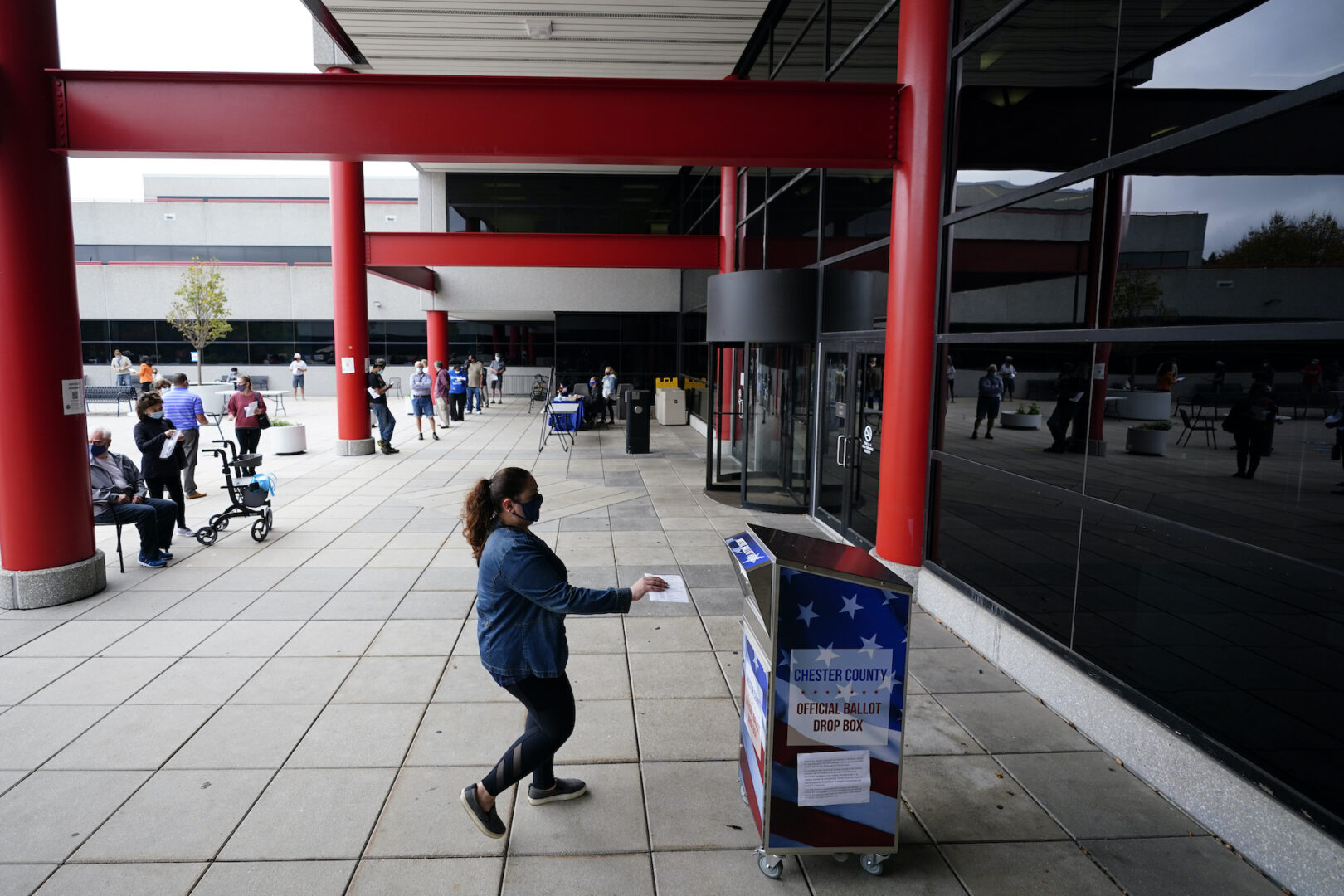 A woman drops off her ballot for the 2020 General Election in the United States outside the Chester County Government Services Center, Friday, Oct. 23, 2020, in West Chester, Pa.

No one has cast a vote in the 2022 general election, but lawsuits are already coming in.

Four Chester County residents — James Romine, Daryl Campbell, Sandra Bowman, and William Borton — have asked the Chester County Court of Common Pleas to prohibit the county from using drop boxes to receive mail and absentee ballots unless the boxes are physically monitored to ensure that people deliver only their own ballot.

The group of residents also wants the court to prohibit the county from accepting and counting any ballots delivered by someone other than the voter.

Included in the legal complaint are screenshots from surveillance footage of an unmanned ballot drop box in West Chester purporting to show more than 300 people delivering more than just one ballot for the 2022 primary election in May.

In Pennsylvania, a voter who qualifies for an emergency absentee ballot may allow a representative to submit their ballot on their behalf; for everyone else, delivering more than one ballot is against the law.

In a written statement announcing the lawsuit, Miller describes the organization’s interest in the case as a “civil rights crusade.”

“This is our second lawsuit in 15 days in Pennsylvania, suing election officials for their lawless conduct and egregious violation of Americans’ sacred right to ensure their vote is not canceled out by fraud and criminal activity,” Miller said.

In a written statement to WHYY News, a Chester County spokesperson said that they couldn’t comment directly on the litigation. However, the spokesperson provided an update on how the county has been in the process of reviewing and refining the ways in which mail ballots are cast.

“The County has produced, posted, and publicized informational videos on many aspects of the election process, including voting by the legislature’s newly authorized mail-in ballot. Prior to the May 2022 Primary, the County also held an in-person information session on the full voting process,” the statement read. “We also posted clear signage on every mail-in ballot drop box throughout the county which noted the rules for returning a mail-in ballot.”

The Pennsylvania Department of State is already preparing to defend the state from the next wave of election-related lawsuits. The constant litigation — a lot of which is based on unfounded claims — has cost taxpayers millions.

Justice The head of the Colorado Department of Public Safety appeared on a leaked Oath Keepers membership list. That raises questions. More than 30 police officers from multiple states attended former President Donald Trump’s Jan. 6 rally or participated in the insurrection that day. Many more with a law enforcement...

By Jacqueline Thomsen and Sarah N. Lynch (Reuters) – Lawyers for former President Donald Trump are resisting a federal judge’s instruction to submit a sworn declaration on whether they believe the government’s list of property taken from Trump’s Florida estate is accurate. According to a letter publicly filed by Trump’s...

Migrant Deaths At The U.S.-Mexico Border Hit A Record High, In Part Due To Drownings

The river that divides Texas and Mexico is known on the U.S. side as the Rio Grande. On the other side, it has a different name: El Río Bravo, "the angry river" or "the fierce river." "It seems like it's a slow moving river, but it's fairly swift. It is...

Credit: Screengrab via Youtube SUSAN CAMPBELL My goodness, but conspiracy theorist Alex Jones is spending quality time with lawyers these days. While he fumes, let’s take a moment to see how we arrived at an epoch where someone with no discernible value can make millions of dollars screaming lies into...