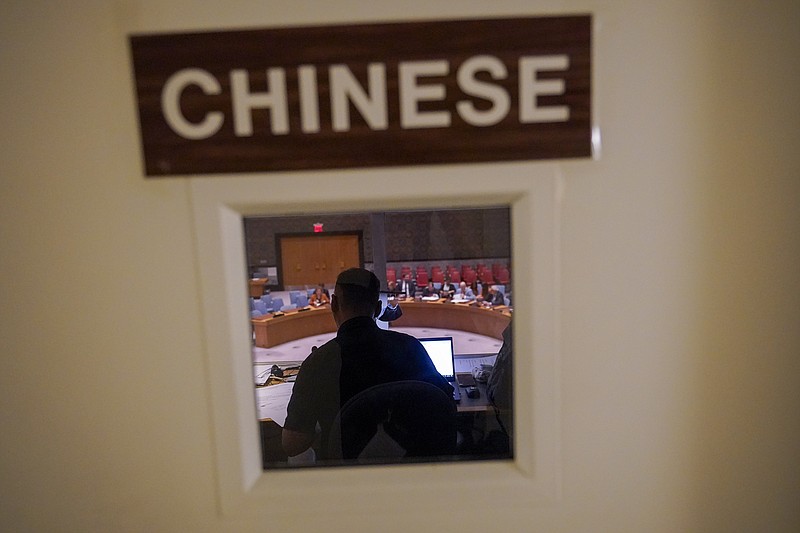 A Chinese translator works during a Security Council meeting at United Nations headquarters ahead of the General Assembly, Friday, Sept. 16, 2022. As world leaders gather in New York at the annual U.N. General Assembly, rising superpower China is also focusing on another United Nations body that is meeting across the Atlantic Ocean in Geneva. (AP Photo/Mary Altaffer)

BEIJING — As world leaders gather in New York at the annual U.N. General Assembly, rising superpower China is also focusing on another United Nations body that is meeting across the Atlantic Ocean in Geneva.

Chinese diplomats are speaking out and lobbying others at an ongoing session of the Human Rights Council to thwart a possible call for further scrutiny of what it calls its anti-extremism campaign in Xinjiang, following a U.N. report on abuses against Uyghurs and other largely Muslim ethnic groups in the western China border region.

The concurrent meetings, on opposite sides of the Atlantic, illustrate China’s divided approach to the United Nations and its growing global influence. Beijing looks to the U.N., where it can count on support from countries it has befriended and in many cases assisted financially, as a counterweight to U.S.-led blocs such as the Group of Seven, which have grown increasingly hostile toward China.

“China sees the U.N. as an important forum that it can use to further its strategic interests and goals, and to reform the global order,” said Helena Legarda from the Mercator Institute for China Studies in Berlin.

While holding up the United Nations as a model of multilateralism, China rejects criticism or decisions that the ruling Communist Party sees as counter to its interests. Its diplomats struck back at the report published last month by the U.N. human rights office raising concerns about possible “crimes against humanity” in Xinjiang — vowing to suspend cooperation with the office and blasting what it described as a Western plot to undermine China’s rise.

China had pushed hard to block the report on Xinjiang, delaying its release for more than a year. In the end, the information did come out — but just minutes before embattled U.N. human rights chief Michelle Bachelet left office.

Like the United States, China feels a certain freedom to ignore U.N. institutions when it wants: The Trump administration pulled the U.S. out of the Human Rights Council in 2018, accusing it of anti-Israel bias. The Biden administration jumped back in this year, and has made a priority of defending Israel in the 47-member-state body.

Also like the United States, China leverages its influence to get its way — effectively stymieing an investigation by the U.N.’s World Health Organization into whether China was the birthplace of the coronavirus pandemic.

Ken Roth, the former executive director of Human Rights Watch, said Chinese President Xi Jinping is trying to redefine what human rights are, in part by casting economic development as a key criterion. China, Roth said, “more than any government in the past, is trying to undermine the U.N. human rights system” — by pressuring U.N. officials, retaliating against witnesses and trying to bribe governments.

“One of their top priorities right now — maybe after Taiwan — is to avoid condemnation by the Human Rights Council,” Roth said. The self-governing island of Taiwan is claimed by China as its sovereign territory, an issue that the Beijing government is vociferous about internationally.

Shi Yinhong, an international relations expert at Renmin University in China, said advocating for the U.N.’s role in maintaining the international order doesn’t mean that China agrees with every U.N. body, citing the COVID-19 origins study and the recent Xinjiang report.

“When the U.N high commissioner for human rights issues such a report, in the eyes of China, it is the same as all organizations in the world, no matter official or private, that defames China,” Shi said.

But China doesn’t want its pique toward the rights office, which falls under U.N. Secretary-General Antonio Guterres, to spill over to its deepening relationship with other parts of the world body that deal with refugees, climate, the internet, satellites, world hunger, atomic weapons, energy and much more.

China wields power as one of the five veto-holding members of the Security Council, helping it build relationships with the United States and others who needed China’s support for past resolutions on Iran and North Korea.

That influence has diminished somewhat with the overall deterioration of U.S.-China ties, Shi said. Subsequently, both China and Russia vetoed a U.S.-backed resolution in May to impose new sanctions on North Korea.

Under Xi, who came to power 10 years ago, China has expanded its U.N. involvement from primarily international development early on to political, peace and security issues, Legarda said.

She noted how China has had its concepts and language worked into U.N. resolutions and used the U.N. system to promote a “Global Development Initiative” proposed by Xi in a video address to last year’s General Assembly.

“This is a reflection of China’s more assertive and ambitious foreign policy under Xi,” Legarda said.

Chinese hold the top jobs at three of the U.N.’s 18 specialized agencies: the Food and Agricultural Organization, the Industrial Development Organization and the International Telecommunications Union, where the United States has put up a candidate to succeed outgoing chief Houlin Zhao. A Chinese official headed the International Civil Aviation Organization until last year.

For China, it’s a matter of prestige as well as influence, Warner said.

“The United States and the Western countries were very much involved in the initial United Nations,” he said. “China doesn’t want to have that kind of leadership. They’re not talking about liberal values, but they want to make sure that their interests are defended in the U.N. system.”

Chinese diplomats spearheaded a joint statement — which it said was backed by 30 countries including Russia, North Korea, Saudi Arabia and Venezuela — that blasted “disinformation” behind the U.N. report on Xinjiang and the “erroneous conclusions” drawn in it. And China’s ambassador in Geneva said Beijing could no longer cooperate with the human rights office — without specifying how.

Sarah Brooks, a China expert at the International Society for Human Rights advocacy group in Geneva, said China could hold up its funding for the office — which lately has come in at $800,000 a year, far less than Western countries that give tens of millions.

Still, Brooks said it would be a “huge blow” if funding from China were to stop, in part because many countries appreciate and support the causes that Beijing helps pay for.

“The optics of it are really damaging,” she said. “You have a country that says, ‘Hi, I want to be responsible, but I’m so thin-skinned … I’m still going to lash out at the organization that drafted it.'”

Keaten reported from Geneva. Edith M. Lederer at the United Nations contributed to this report. 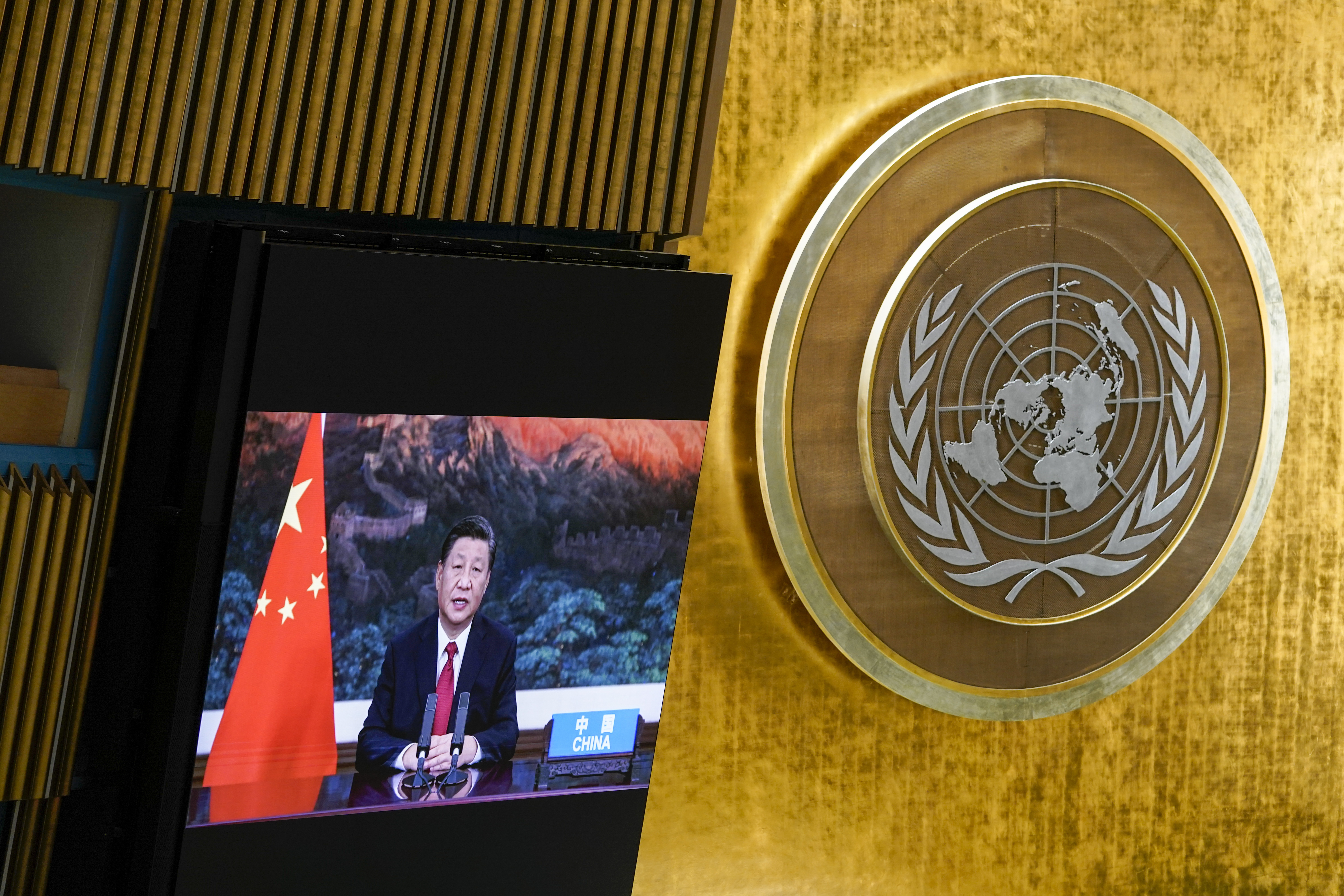 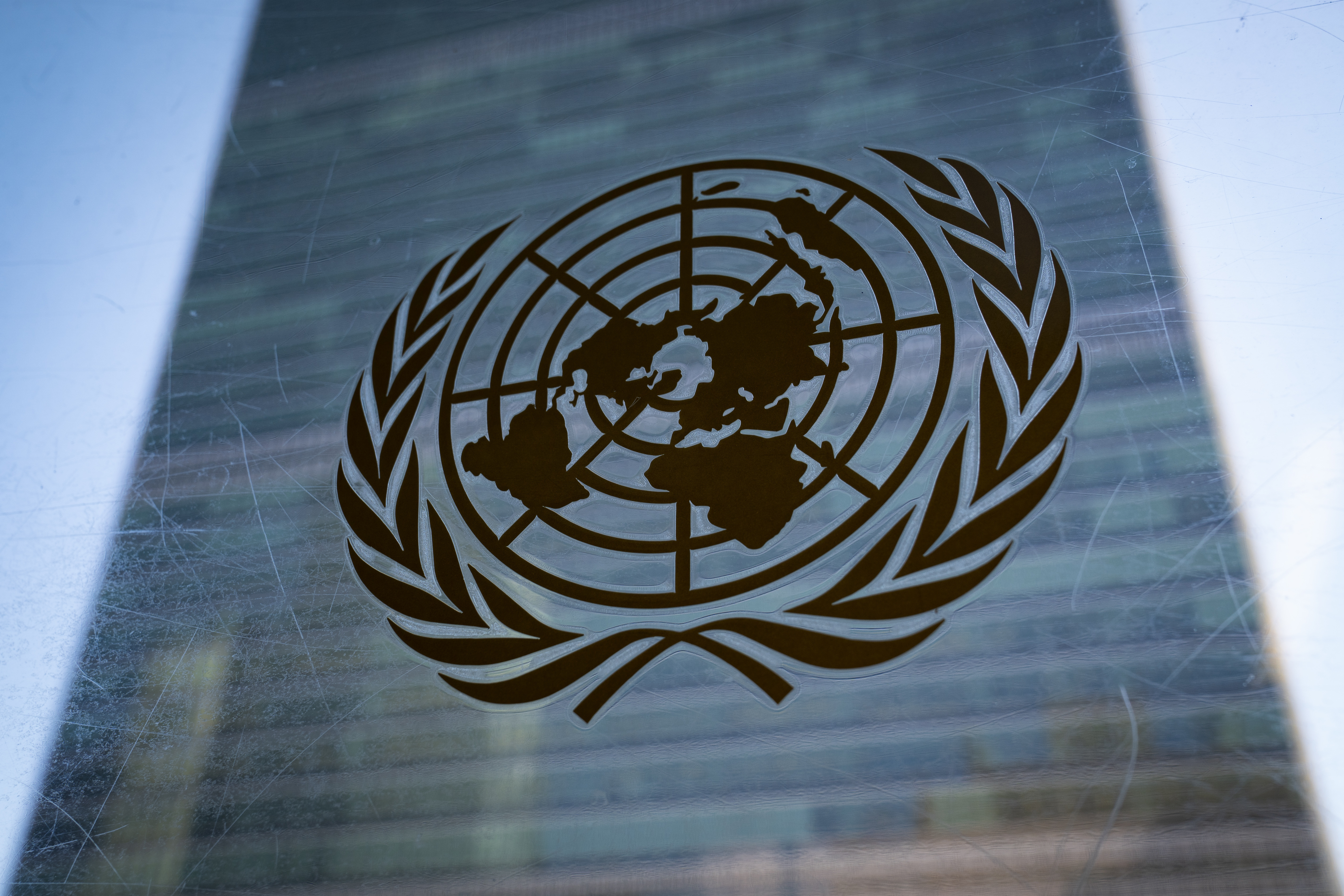 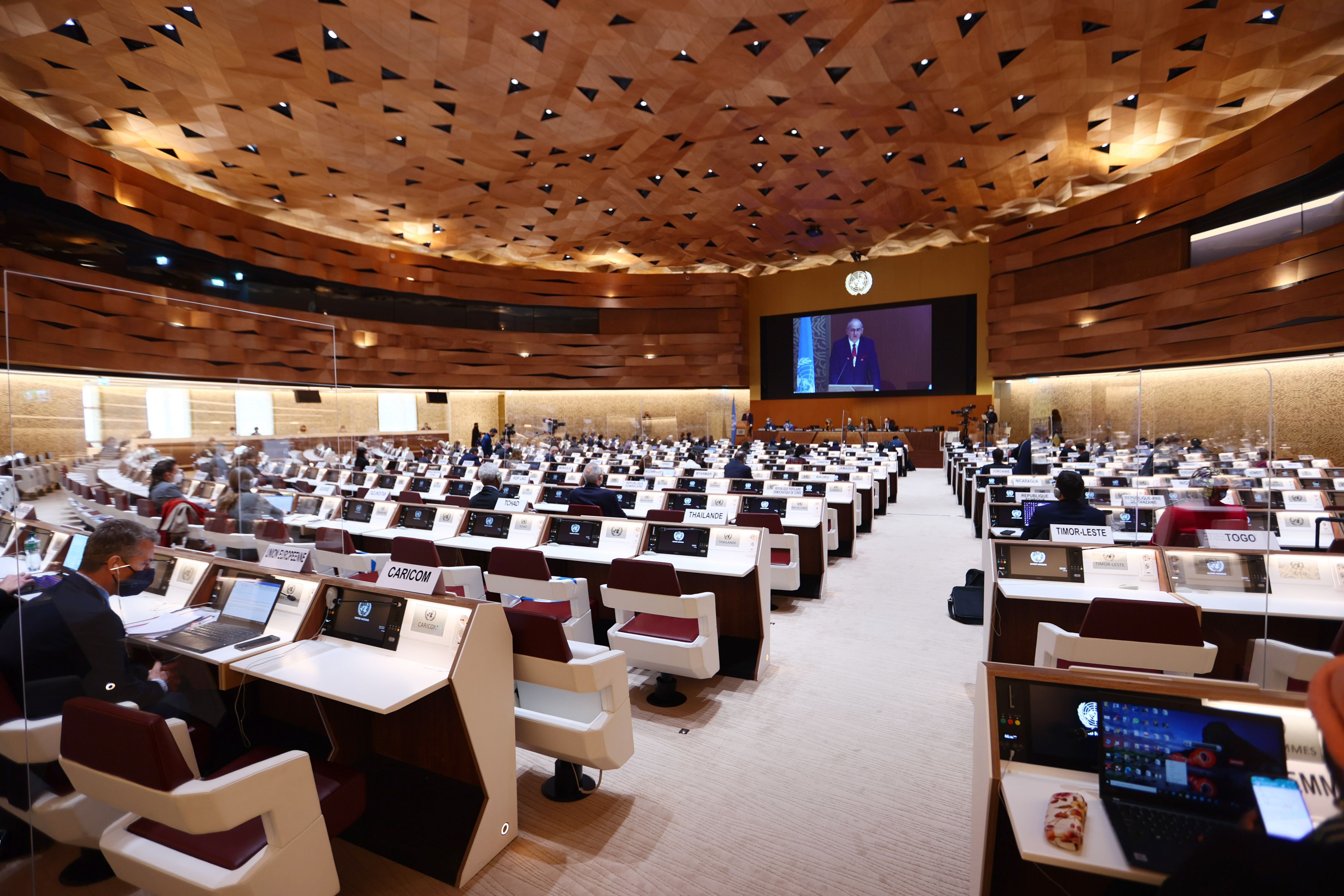 FILE – Zbigniew Rau, Minister for Foreign Affairs of Poland addresses the Human Rights Council at the United Nations in Geneva, Switzerland, March 2, 2022. As world leaders gather in New York at the annual U.N. General Assembly, rising superpower China is also focusing on another United Nations body that is meeting across the Atlantic Ocean in Geneva. (Denis Balibouse/Pool via AP, File) 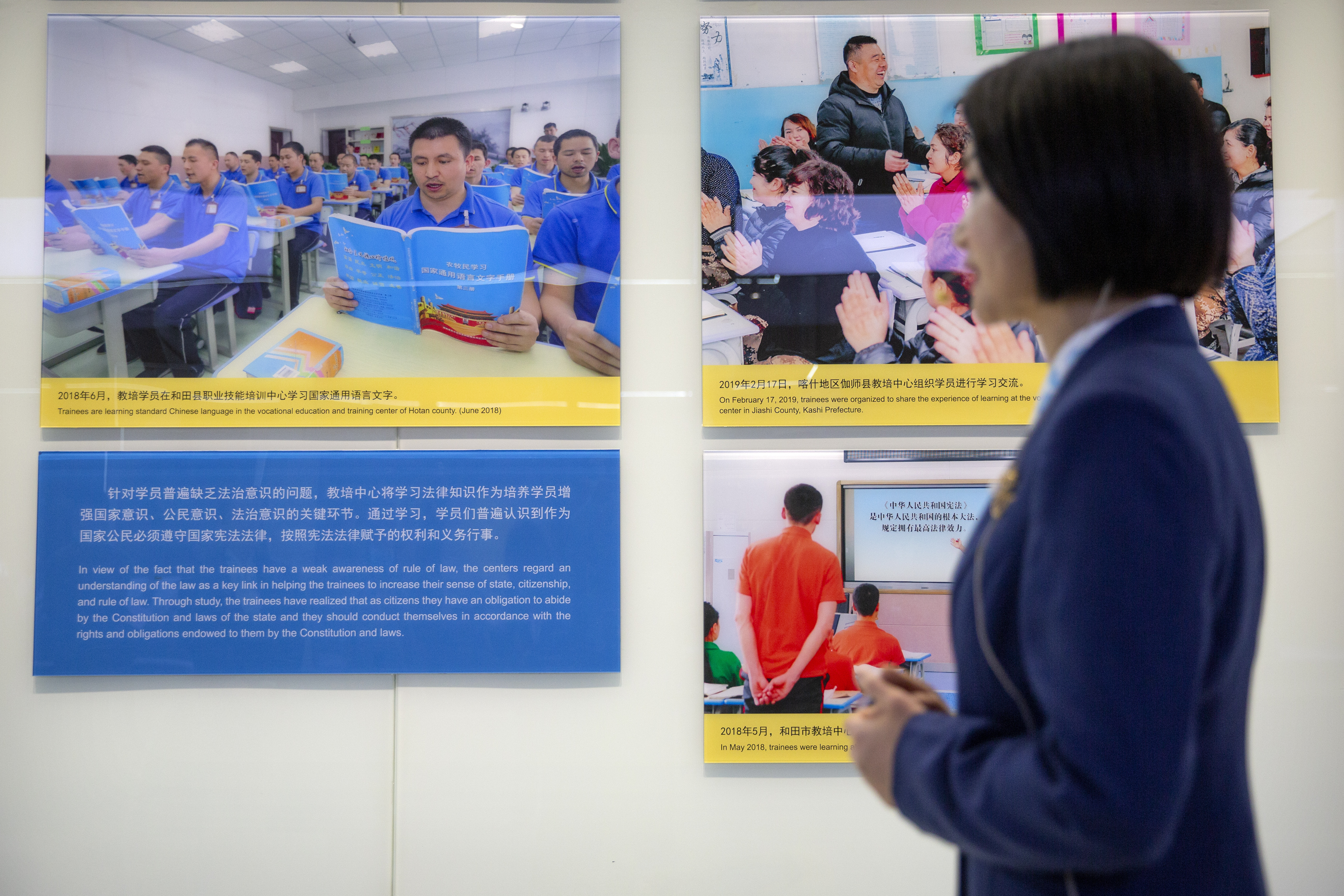 FILE – A tour guide stands near a display showing images of people at locations described as vocational training centers in southern Xinjiang at the Exhibition of the Fight Against Terrorism and Extremism in Urumqi in western China’s Xinjiang Uyghur Autonomous Region on April 21, 2021. As world leaders gather in New York at the annual U.N. General Assembly, rising superpower China is also focusing on another United Nations body that is meeting across the Atlantic Ocean in Geneva. (AP Photo/Mark Schiefelbein, File) 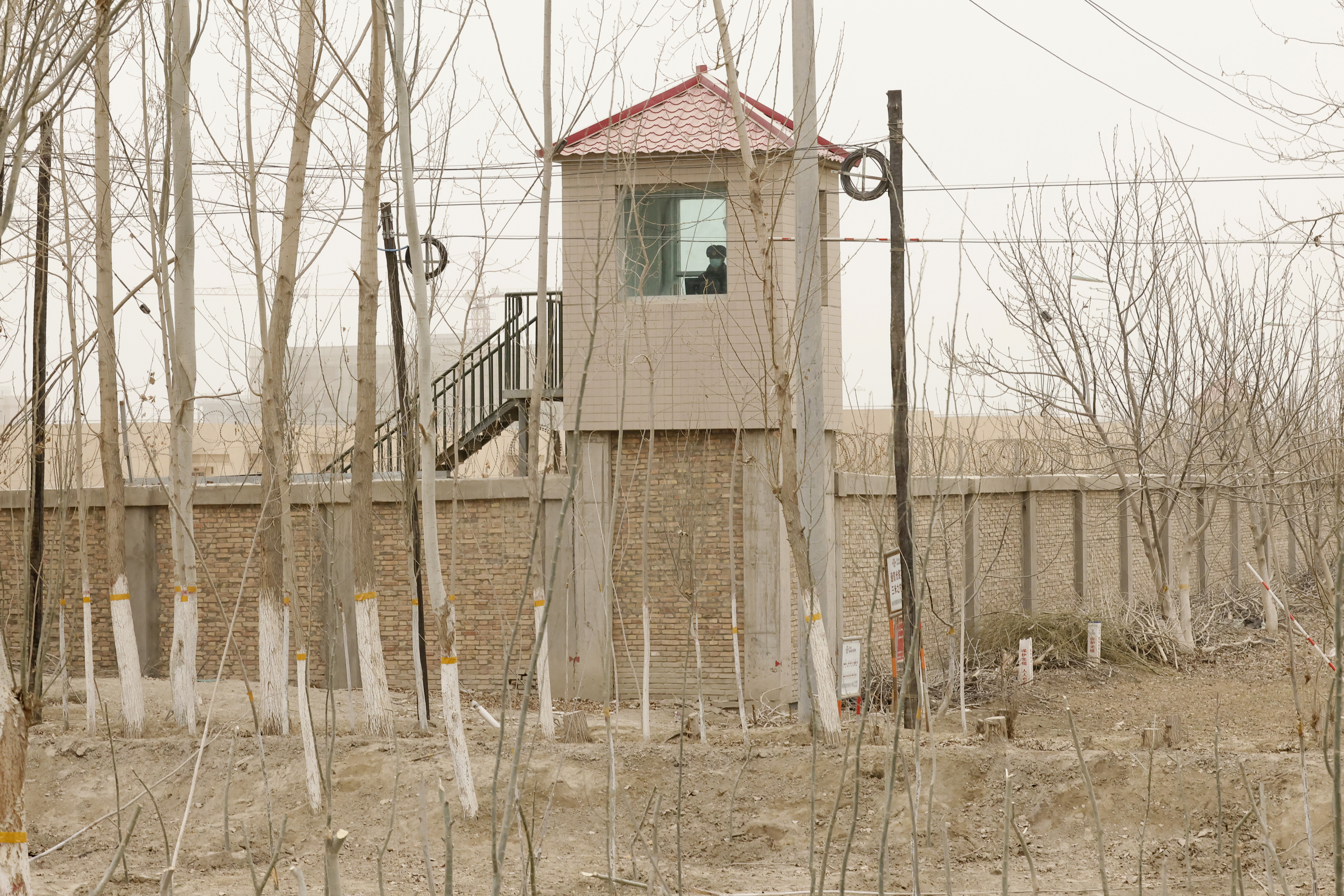 FILE – A security guard watches from a tower around a detention facility in Yarkent County in northwestern China’s Xinjiang Uyghur Autonomous Region on March 21, 2021. As world leaders gather in New York at the annual U.N. General Assembly, rising superpower China is also focusing on another United Nations body that is meeting across the Atlantic Ocean in Geneva. (AP Photo/Ng Han Guan, File)

Liz Cheney On If She Prefers Democrats Hold House Majority: 'It's A Tough Question'

AUSTIN, Texas – Rep. Liz Cheney, R-Wyo., said that she was unsure whether she would prefer Democrats hold their majority in the House of Representatives during the upcoming midterm elections, arguing that the threat posed by some Republicans who challenged the 2020 presidential election may outweigh her policy differences with...

Sunday, September 25, 2022 View Larger + Former President Donald Trump PHOTO: file Okay, the primaries are over for 2022, and today marks 44 days until Election Day, November 8th. The trends are not boding well for the party in power, but is there enough time to turn the tide?...

Liz Cheney Says She Would Campaign For Democrats