Back after missing most of last season, Rodrigo Blankenship missed a crucial field goal that would have avoided the Colts’ first tie in 40 years. The team is now moving on from the third-year kicker.

Indianapolis is waiving Blankenship, according to Tom Pelissero of NFL.com (on Twitter). The team may be set to hold a pre-Week 2 practice competition. Chase McLaughlin and Lucas Havrisik are signing to the Colts’ practice squad, Pelissero adds (via Twitter). Former Jaguars Matthew Wright and Josh Lambo also worked out for the team Tuesday, per the Indianapolis Star’s Joel Erickson (Twitter links).

This will mark a return to Indianapolis for McLaughlin, whom the team used during part of the 2019 season. An Adam Vinatieri injury brought in McLaughlin, who had already kicked in games for the Chargers and 49ers that year. McLaughlin finished the season with the Colts, who replaced him with Blankenship in 2020. McLaughlin went 5-for-6 on field goals with Indy in 2019. He was 15-for-21 in 16 Browns games last season. A UDFA rookie out of Arizona, Havrisik was the Wildcats’ kicker for most of the past five seasons. His two 57-yard makes in college double as the Pac-12 program’s record. Havrisik also participated in the Colts’ rookie minicamp this year. 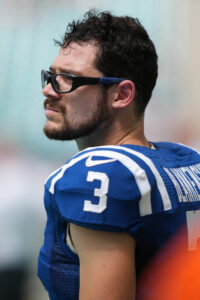 In addition to his 42-yard overtime miss, Blankenship sent two kickoffs — his final regulation kick and the overtime opener — out of bounds. The Texans scored on neither of the ensuing drives, but some with the Colts were more frustrated with those sequences than the OT field goal miss, The Athletic’s Zak Keefer tweets.

Blankenship has not been the Colts’ primary kickoff man for most of his career. Longtime punter Rigoberto Sanchez handled those duties when available. The latter going down during a training camp practice led to the Colts signing Matt Haack but using their kicker as their kickoff man in Week 1.

Last season, the Colts placed Blankenship on IR — after his injury in Baltimore happened during a Monday-night collapse by the team — and used Michael Badgley as their kicker in the final 12 games. The team did not bring Badgley to training camp, however, with Keefer adding it viewed rookie UDFA Jake Verity as the higher-upside choice (Twitter link). The Colts waived Verity as they moved their roster to 53.

A former four-year Georgia Bulldogs kicker, Blankenship signed with the Colts as a 2020 UDFA. Blankenship made 87% of his field goals as a rookie, though he was 1-for-3 from beyond 50 yards. Badgley made 86% of his tries during his fill-in stay last season. This will be the third time in four seasons the Colts will have needed to make an in-season kicker switch. Vinatieri’s early-season struggles in 2019 led to a late-season surgery, beginning the stretch of uncertainty. Prior to that, the most notable in-season kicker change the Colts had made occurred back in 2009, when a Vinatieri injury prompted the eventual AFC champions to sign Matt Stover. Vinatieri’s 2019 injury has brought frequent changes at this Colts position.

Posted at 7:40 AM, Sep 29, 2022 and last updated 2022-09-29 07:43:39-04 INDIANAPOLIS — A driver was killed in a crash early Thursday on the city's north side after another person drove pas a stop sign without stopping and struck with their vehicle, police say.Officers found the victim badly injured...

INDIANAPOLIS (WISH) — One of three Amur tiger cubs born at the Indianapolis Zoo in May has died, the zoo has announced. Roman, born with siblings Helina and Nicholas on May 27, had a congenital heart defect that caused “numerous health concerns,” the zoo said Wednesday on Facebook. Surgery was...

To call this past weekend’s NASCAR Cup Series race at Texas Motor Speedway a low-point in the lifecycle of the Next Gen car would be an understatement. Several leaders — not just cars — wrecked out of the race with blown tires; some after just 30 or so laps. Following...

FISHERS, FORMERLY OF FORTVILLE Richard “Dick” Duane Poe, 88, of Fishers, IN, passed away peacefully September 27, 2022. He was born on January 2, 1934, in Shelbyville, IN, to Amile and Pauline (Dodds) Poe. Dick was a 1952 graduate of Shelbyville High School and served in the United States Army....