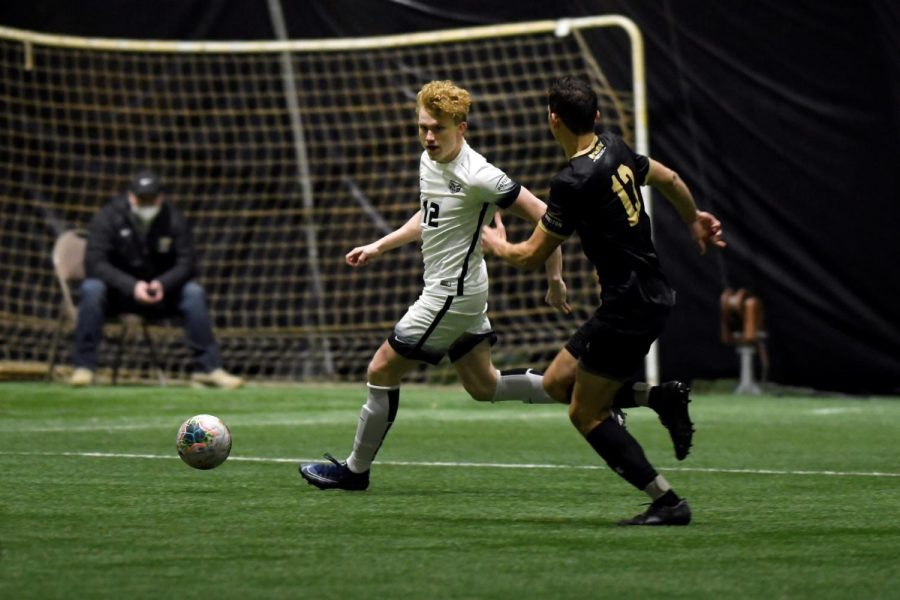 The Oakland University men’s soccer team took a late summer trip out to the Arizona desert to take on the Grand Canyon University Antelopes on Tuesday, Sept. 13. The long trip out west resulted in a 2-1 loss at the hands of the Antelopes.

Through their first six games of the season — with an 0-5-1 record — the Golden Grizzlies have scored just four total goals, and have yet to find the net twice in the same match. Furthermore, the team scored just one total goal in its three exhibition matches against Saginaw Valley State, Ohio State and Akron.

Through six games last season, the Golden Grizzlies sat with a 2-2-2 record. The only losses came to in-state Big Ten powers Michigan and Michigan State.

However, this year’s team is not last year’s. Seasons change. New players come in. Some players leave. It’s how the team adapts to the early season difficulties that matters most.

The loss marked the Golden Grizzlies’ fifth defeat of the season. Oakland dropped its first four matches of the season to Creighton, Omaha, DePaul and Butler, before managing to tie Purdue Fort Wayne in the first Horizon League match of the season.

Tuesday night’s match against the Antelopes didn’t fare much better for the Golden Grizzlies. Oakland found the back of the net in the 40th minute.

Senior Villie Ahola put the Golden Grizzlies on the board and tied the game late in the first half as he scored Oakland’s first goal in more than 80 minutes of game action, going back to the team’s 1-1 tie against Purdue Fort Wayne.

Ahola’s goal marked his first of the season and the fourth of his illustrious career at Oakland. The senior played one season at Fairleigh Dickinson before transferring to Oakland in 2020.

Grand Canyon struck early in the second half, claimed a 2-1 lead and never let it go. The Antelopes held off the Grizzlies for 40 minutes and finished the game with the slimmest of victories.

The Golden Grizzlies, which remain winless at this point in the season, will not be treated any more kindly with the upcoming schedule.

After making the cross-country trip back home, Oakland will take an hour’s trip southwest to take on the Michigan Wolverines on Monday, Sept. 19.

When the Wolverines and Golden Grizzlies squared off in the aforementioned game last season, Oakland took Michigan to double overtime before a Wolverine goal in the 109th minute ended the game.

Following the match with the Wolverines, Oakland will wrap up its non-conference schedule with a trip to Bowling Green to take on the Falcons on Friday, Sept. 23.

Oakland will kick start its Horizon League schedule on Wednesday, Sept. 28 against Robert Morris. It will then host Detroit Mercy before embarking on a two-game road trip to Cleveland State and Green Bay.

FORT WAYNE, Ind. (WPTA) - Indiana Tech volleyball (18-1) suffered its only loss of the season on Friday night and responded strong with a, 3-0, sweep over Aquinas at the Schaefer Center on Saturday afternoon.The Warriors Taylor Paul slammed home a team-leading 10 kills.Copyright 2022 WPTA. All rights reserved. Read...

The chart lists crimes through Sept. 19 investigated by the Fort Wayne Police Department including burglaries, robberies and thefts from vehicles. Because of the department’s reporting policies, an attempted robbery or burglary is classified as an actual robbery or burglary, respectively. The listed addresses are those where crimes were reported...

Orlando waived former Gonzaga standout Joel Ayayi on Saturday, less than two weeks after signing him and a few days before the Magic open training camp.Ayayi had signed an Exhibit 10 contract with Orlando on Sept. 12. The Magic announced the addition of Aleem Ford and Zavier Simpson on Saturday,...