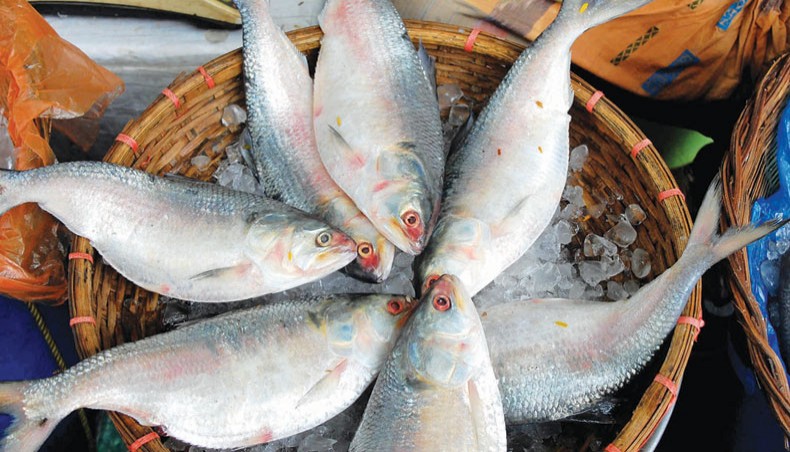 Hilsa fish are seen in a basket at Azimpur in the capital Dhaka on Friday. — Focusbangla photo

When it comes to hilsa, the general rule is that you pay less during the rainy season than in winter.

But this year, even the incessant rains have failed to cool off the prices of the monsoon delicacy, at least in Khulna. In simple words, the gastronome’s delight is no longer within the reach of the common people.

‘The fishermen are reeling under the impact of spiralling prices of diesel that they need to run their trawlers. Also, those hoarding the fish in refrigerators are responsible for pushing up the prices of ilish,’ Joydeb Pal, the district fisheries officer, told UNB.

Fishers agreed. ‘The trawlers we use for fishing, and the trucks and mini trucks used for transportation are all diesel driven. So, the fuel price hike has directly impacted us,’ said Belayet Mir a fisherman from Barguna.

Some fish traders, however, claimed that the prices of hilsa have gone up in the wake of the government giving 49 business units permission to export 2,400 tonnes of hilsa to India for the upcoming Durga puja.

Sheikh Saidul Islam, a fish trader, said, ‘Due to the government’s multipurpose plan, the production of hilsa has increased. But its prices vary as per the market demand.’

Afzal, a retail trader at Gallamari Bazar, said that ‘most people are just asking the prices but refraining from buying the fish.’

Ishak Member, a trader at Rupsha fish market, said, ‘Several hundred traders are involved in the hilsa business. We all urge the authorities concerned to take steps for the growth of the business.’

Hilsa has the highest contribution in the country’s fish production as the single fish species.

Every year, the government imposes a two-month ban on catching, selling, hoarding and transporting hilsa to boost its production.

Monroe W. "Will" Courtney, Jr. was called home on September 22, 2022 after a brief illness, while surrounded by his loving family. Will was a U.S. Air Force veteran and retired as a Mechanical 1st Line Supervisor from Exxon Refinery in 1996 after 32 years. He was active with many...

It will take several months for Canada to restore critical infrastructure after the powerful Storm Fiona left an "unprecedented" trail of destruction, officials said on Sunday. "It's like a complete war zone," said Brian Button, mayor of Port aux Basques, one of the hardest hit towns on the southwest tip...

Andretti Clan Determined To Join F1 Grid In 2024 – US Sports

Africa’s Climate Emergency: A Call For Adaptation And Resilience Through Agroecology To COP27 And Beyond | News Ghana