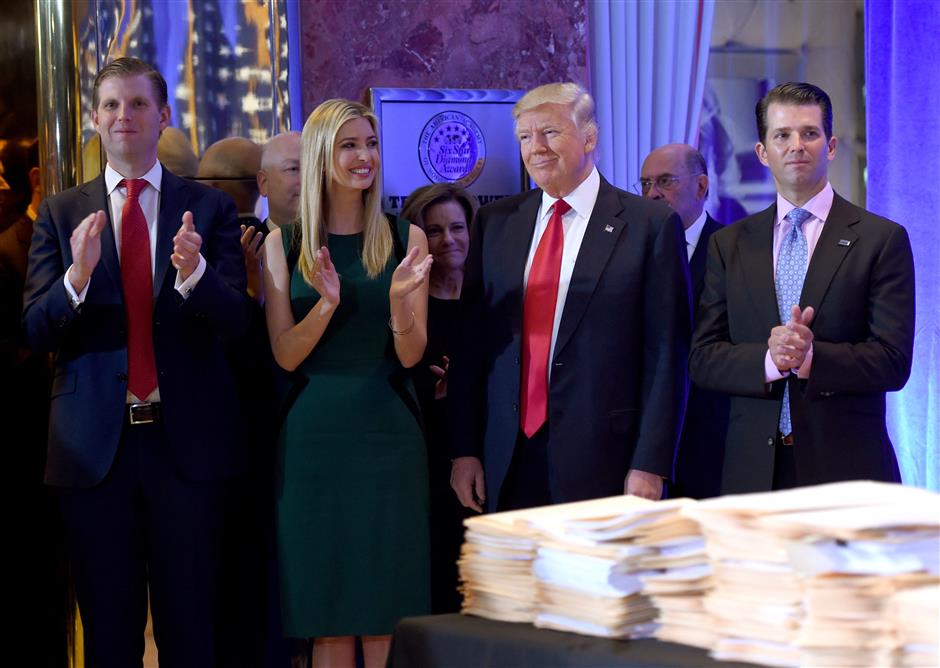 James accused Trump, the Trump Organization, senior management, and involved entities of “engaging in years of financial fraud to obtain a host of economic benefits.”

The civil lawsuit alleged Trump, with the help of his three adult children and senior executives at the Trump Organization, falsely inflated his net worth by billions of US dollars to induce banks to lend money to his business on more favorable terms than would otherwise have been available to the company and to gain tax benefits, among other things.

Trump and the Trump Organization were said to have “knowingly and intentionally created more than 200 false and misleading valuations of assets on his annual Statements of Financial Condition to defraud financial institutions.”

James’ office is seeking to permanently bar Trump and his adult children from serving as an officer or director in any New York corporation or similar business entity registered and/or licensed in the state of New York.

It also asks Trump and the Trump Organization to be banned from entering into any New York real estate acquisitions for five years and the disgorgement of all financial benefits obtained through the persistent fraudulent practices, estimated to total 250 million dollars.

Besides, James has referred the matter to the US Attorney’s Office for the Southern District of New York and the Internal Revenue Service for criminal investigation.

“For too long, powerful, wealthy people in this country have operated as if the rules do not apply to them,” James, a Democrat, said in a statement.

Trump, a Republican who served as US president from 2017 to 2021, hasn’t responded to the lawsuit but he and his allies have frequently lashed out at James for the inquiry into him and his namesake business.

Last month, Trump attended a deposition at the New York attorney general’s office but declined to answer questions by invoking the Fifth Amendment right against self-incrimination.

The US Department of Justice (DOJ) is investigating whether Trump mishandled presidential and government records – some of them allegedly highly classified – when and after leaving office.

Trump has lambasted the Mar-a-Lago “raid” as well as the DOJ probe and denied any wrongdoing.

An independent arbiter, or “special master,” named by a federal judge recently, is reviewing items seized by federal agents in the search of Mar-a-Lago.

Over the past three years, the image of Jagan as a messiah of the poor has begun to take a beating; hence, YSR may be the best bet for the election this time In the 2024 elections, will CM Jagan Mohan Reddy return to power with his self-image or by...

Opinion by Dean ObeidallahIf the GOP wins control of the House of Representatives this November, it will become the "protect Donald Trump from prosecution" caucus. That's the message we've been hearing with increasing frequency from Trump-loving Republicans since August 8, when FBI agents searched the former President's Mar-a-Lago residence.The search,...

YENILMEZ: Why Aren’t We More Scared?

03:02 - Source: CNN Trump admits fame drove his desire to be president in new book Editor’s Note: Dean Obeidallah, a former attorney, is the host of SiriusXM radio’s daily program “The Dean Obeidallah Show” and a columnist for The Daily Beast. Follow him @DeanObeidallah. The opinions expressed in this...