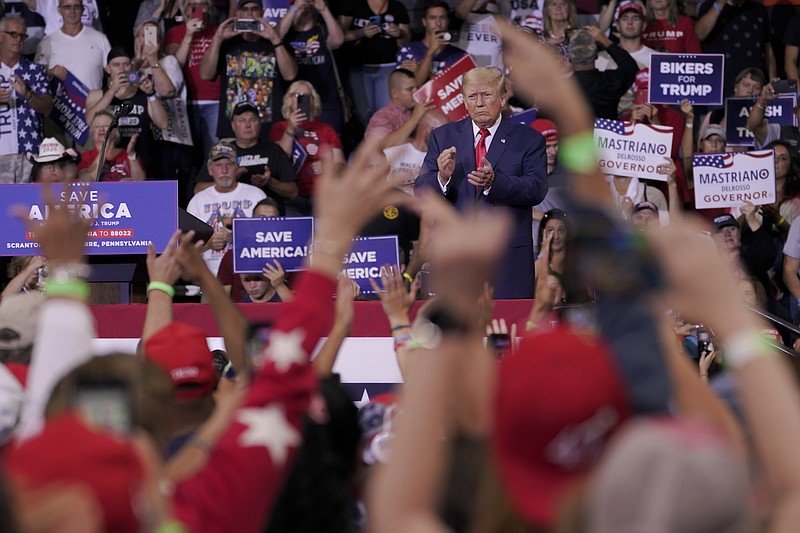 FILE – Former President Donald Trump speaks at a rally in Wilkes-Barre, Pa., Sept. 3, 2022. Trump is increasingly embracing and endorsing the QAnon conspiracy theory, even as the number of frightening real-world incidents linked to the movement increase.(AP Photo/Mary Altaffer, File)

After winking at QAnon for years, Donald Trump is overtly embracing the baseless conspiracy theory, even as the number of frightening real-world events linked to it grows.

On Tuesday, using his Truth Social platform, the Republican former president reposted an image of himself wearing a Q lapel pin overlaid with the words “The Storm is Coming.” In QAnon lore, the “storm” refers to Trump’s final victory, when supposedly he will regain power and his opponents will be tried, and potentially executed, on live television.

As Trump contemplates another run for the presidency and has become increasingly assertive in the Republican primary process during the midterm elections, his actions show that far from distancing himself from the political fringe, he is welcoming it.

He’s published dozens of recent Q-related posts, in contrast to 2020, when he claimed that while he didn’t know much about QAnon, he couldn’t disprove its conspiracy theory.

Pressed on QAnon theories that Trump allegedly is saving the nation from a satanic cult of child sex traffickers, he claimed ignorance but asked, “Is that supposed to be a bad thing?”

“If I can help save the world from problems, I’m willing to do it,” Trump said.

Trump’s recent postings have included images referring to himself as a martyr fighting criminals, psychopaths and the so-called deep state. In one now-deleted post from late August, he reposted a “q drop,” one of the cryptic message board postings that QAnon supporters claim come from an anonymous government worker with top secret clearance.

A Trump spokesperson did not respond to a request for comment.

Even when his posts haven’t referred to the conspiracy theory directly, Trump has amplified users who do. An Associated Press analysis found that of nearly 75 accounts Trump has reposted on his Truth Social profile in the past month, more than a third of them have promoted QAnon by sharing the movement’s slogans, videos or imagery. About 1 in 10 include QAnon language or links in their profile bios.

Earlier this month, Trump chose a QAnon song to close out a rally in Pennsylvania. The same song appears in one of his recent campaign videos and is titled “WWG1WGA,” an acronym used as a rallying cry for Q adherents that stands for “Where we go one, we go all.”

“Yup, haters!” wrote one commenter on an anonymous QAnon message board. “Trump re-truthed Q memes. And he’ll do it again, more and more of them, over and OVER, until (asterisk)everyone(asterisk) finally gets it. Make fun of us all you want, whatever! Soon Q will be everywhere!”

“Trump Sending a Clear Message Patriots,” a QAnon-linked account on Truth Social wrote. “He Re-Truthed This for a Reason.”

The former president may be seeking solidarity with his most loyal supporters at a time when he faces escalating investigations and potential challengers within his own party, according to Mia Bloom, a professor at Georgia State University who has studied QAnon and recently wrote a book about the group.

“These are people who have elevated Trump to messiah-like status, where only he can stop this cabal,” Bloom told the AP on Thursday. “That’s why you see so many images (in online QAnon spaces) of Trump as Jesus.”

On Truth Social, QAnon-affiliated accounts hail Trump as a hero and savior and vilify President Joe Biden by comparing him to Adolf Hitler or the devil. When Trump shares the content, they congratulate each other. Some accounts proudly display how many times Trump has “re-truthed” them in their bios.

By using their own language to directly address QAnon supporters, Trump is telling them that they’ve been right all along and that he shares their secret mission, according to Janet McIntosh, an anthropologist at Brandeis University who has studied QAnon’s use of language and symbols.

It also allows Trump to endorse their beliefs and their hope for a violent uprising without expressly saying so, she said, citing his recent post about “the storm” as a particularly frightening example.

“The ‘storm is coming’ is shorthand for something really dark that he’s not saying out loud,” McIntosh said. “This is a way for him to point to violence without explicitly calling for it. He is the prince of plausible deniability.”

Bloom predicted that Trump may later attempt to market Q-related merchandise or perhaps ask QAnon followers to donate to his legal defense.

Regardless of motive, Bloom said, it’s a reckless move that feeds a dangerous movement.

A growing list of criminal episodes has been linked to people who had expressed support for the conspiracy theory, which U.S. intelligence officials have warned could trigger more violence.

QAnon supporters were among those who violently stormed the Capitol during the failed Jan. 6, 2021, insurrection.

In November 2020, two men drove to a vote-counting site in Philadelphia in a Hummer adorned with QAnon stickers and loaded with a rifle, 100 rounds of ammunition and other weapons. Prosecutors alleged they were trying to interfere with the election.

Last year, a California man who told authorities he had been enlightened by QAnon was accused of killing his two children because he believed they had serpent DNA.

Last month, a Colorado woman was found guilty of attempting to kidnap her son from foster care after her daughter said she began associating with QAnon supporters. Other adherents have been accused of environmental vandalism, firing paintballs at military reservists, abducting a child in France and even killing a New York City mob boss.

On Sunday, police fatally shot a Michigan man who they say had killed his wife and severely injured his daughter. A surviving daughter told The Detroit News that she believes her father was motivated by QAnon.

“I think that he was always prone to (mental issues), but it really brought him down when he was reading all those weird things on the internet,” she told the newspaper.

The same weekend a Pennsylvania man who had reposted QAnon content on Facebook was arrested after he allegedly charged into a Dairy Queen with a gun, saying he wanted to kill all Democrats and restore Trump to power.

Major social media platforms including YouTube, Facebook and Twitter have banned content associated with QAnon and have suspended or blocked accounts that seek to spread it. That’s forced much of the group’s activities onto platforms that have less moderation, including Telegram, Gab and Trump’s struggling platform, Truth Social. 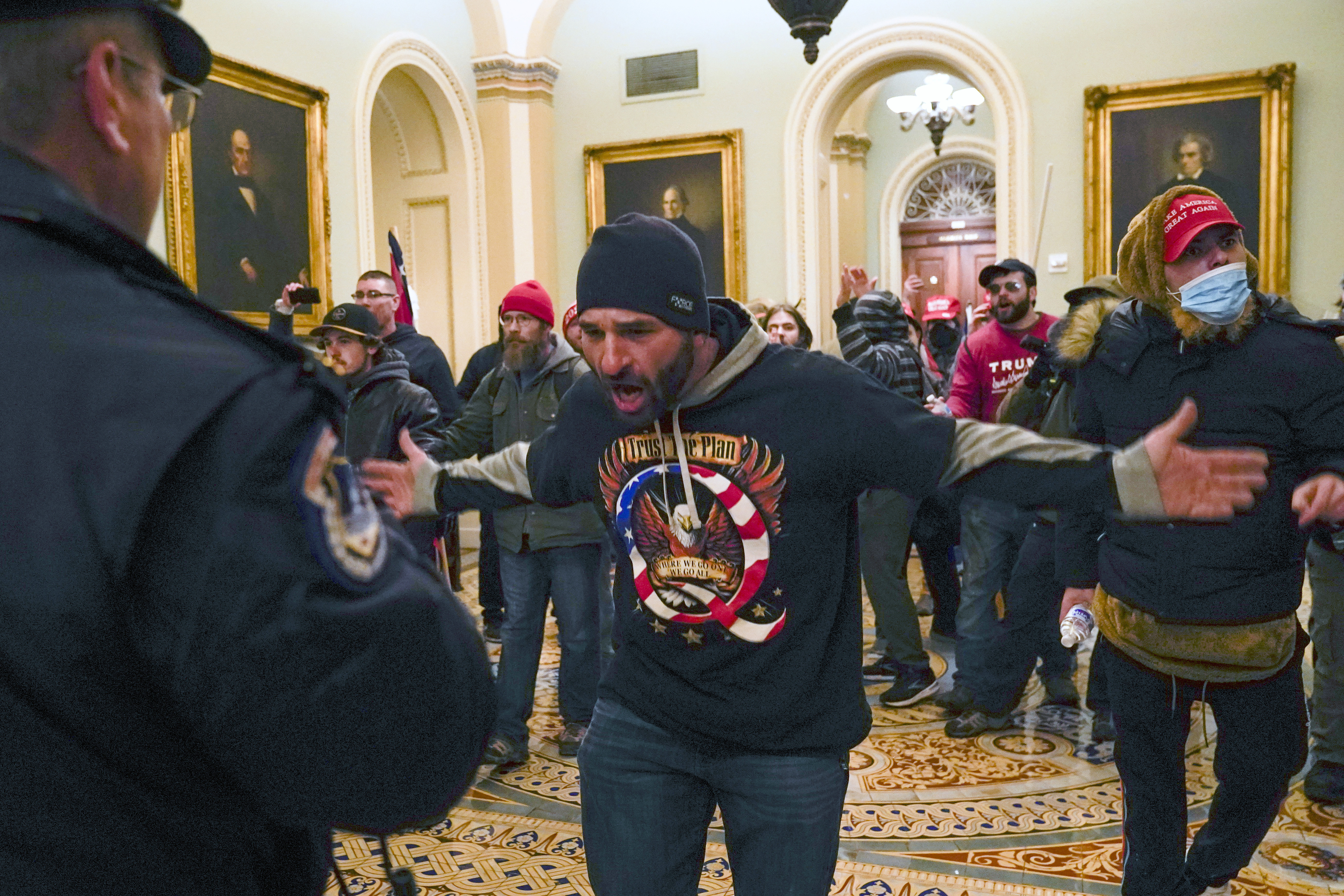 FILE – Supporters of President Donald Trump, including Doug Jensen, center, confront U.S. Capitol Police in the hallway outside of the Senate chamber at the U.S. Capitol in Washington, on Jan. 6, 2021. The former president is increasingly embracing and endorsing the QAnon conspiracy theory, even as the number of frightening real-world incidents linked to the movement increase. On Tuesday, Sept. 13, 2022, using his Truth Social platform, Trump reposted an image of himself — wearing a Q lapel pin — overlaid with the words “The Storm is Coming.” (AP Photo/Manuel Balce Ceneta, File) 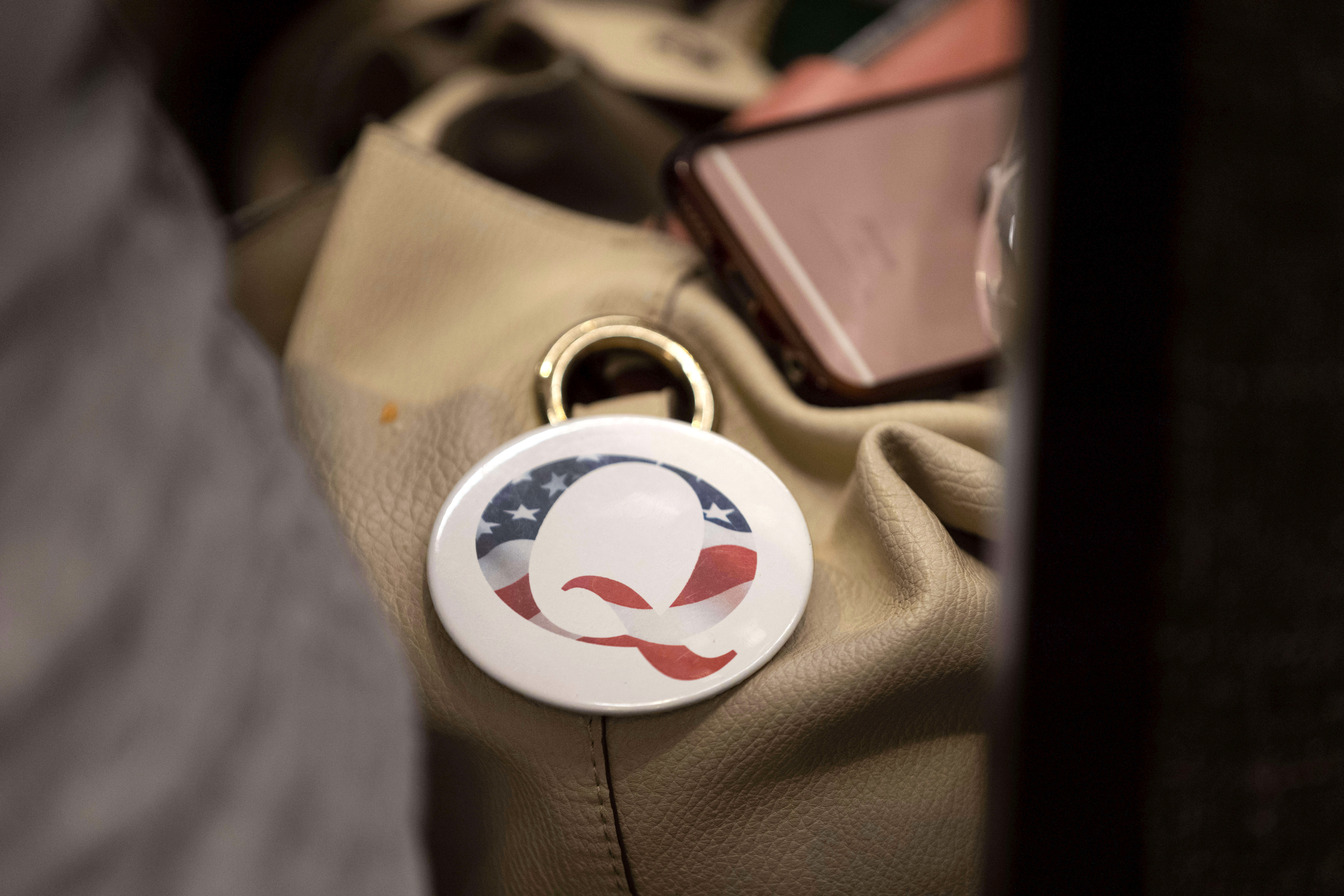 FILE – A QAnon conspiracy theory button sits affixed to the purse of an attendee of the Nebraska Election Integrity Forum on Saturday, Aug. 27, 2022, in Omaha, Neb. Former President Donald Trump is increasingly embracing and endorsing the QAnon conspiracy theory, even as the number of frightening real-world incidents linked to the movement increase. On Tuesday, Sept. 13, 2022, using his Truth Social platform, Trump reposted an image of himself — wearing a Q lapel pin — overlaid with the words “The Storm is Coming.” (AP Photo/Rebecca S. Gratz, File)

By Katelyn Polantz, CNN Reporter, Crime and Justice (CNN) -- Among the items seized by the FBI at Mar-a-Lago were clemency requests, health care documents, IRS forms and paperwork that appears to be related to the 2020 election, according to a Justice Department list made public this week.The collection also...

What To Know About Georgia's Senate Race

Herschel Walker, the Republican running to unseat incumbent Democratic Sen. Raphael Warnock in Georgia, this week denied reports that he had paid for a woman's abortion in 2009.Walker has vehemently denied the story, called it a "flat-out lie" and threatened to sue the outlet. CBS News has not confirmed the...

Former US President Donald Trump has sued CNN (Cable News Network) for $475 million in punitive damages for making “maliciously false and defamatory statements” about him aimed at “defeating him politically”. In the lawsuit filed on Monday in US district court for Southern Florida, Trump sued CNN alleging defamation, accusing...

Rep. Liz Cheney (R-Wyo.) on Wednesday criticized her party for what she sees as a growing sector of the GOP that supports Russian President Vladimir Putin as he wages his attacks on Ukraine.   “You know, the Republican Party is the party of Reagan, the party that essentially won the Cold War....